skip to main | skip to sidebar

Note that this component is still very experimental as I'm trying to figure out what works best with JavaFX.

Among others it contains:
The library is available from Maven Central (along with the sources and javadoc artifact):

This component is an extension of Drombler Commons - FX - Core and provides controls and DataRenderers for the new Date and Time API (JSR-310), which is planned to be added to the upcoming Java SE 8 release. 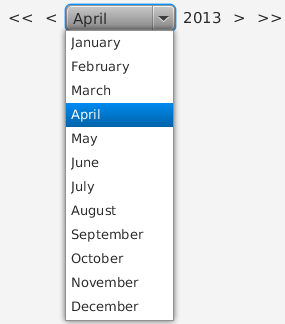 As some months span up to 6 weeks, at least 6 weeks are always shown, where the first week is the week with the first day of the month.

The week of the year is shown on the left-hand side.

The dates are colored differently depending on if they are in the shown month or not.

Here is another sample of the same control with the following configuration: 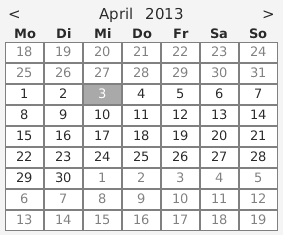 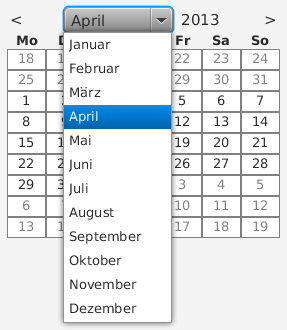 This sample only shows a single month at a time.

The previousWeeks and the nextWeeks are added to the standard 6 weeks, so this sample shows 9 weeks.

Note that in this sample, the week of year column at the left-hand side of the control and the year scroll buttons of the YearMonthSpinner are hidden.

Also note that not only the days of the week and the months are now shown in German, but the week starts now with Monday, where when using the en_US locale the week starts with Sunday.
All this locale-sensitive information is provided by the Date and Time API. 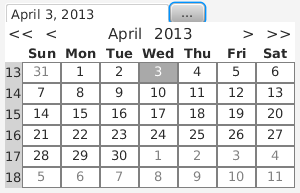 The library is available from Maven Central (along with the sources and javadoc artifact):

In order to use the Date and Time API jars inside an OSGi framework, you need to register the system packages. In a Drombler FX application you can add the following configuration to your drombler-fx-application module:


Since the Date and Time API jars replace some core classes, you need to specify the jars on the bootclasspath. On the command line you can add the following java command line argument:


where <JAVAX_TIME_0_6_3_HOME> is the parent directory of the Date and Time API jars.

If this path is stored in an environment variable you can use ${env.JAVAX_TIME_0_6_3_HOME} when you're using the Exec Maven Plugin to run your application.

The aggregated Javadoc of both components can be found here: http://www.drombler.org/DromblerCommons/docs/site/0.1/apidocs/

The source code can be found here.


When a core API such as the Date and Time API gets "replaced", you must make sure it integrates well with the existing libraries and frameworks.

The  Drombler Commons - FX - Date and Time component provides this integrations for JavaFX and shows that, at least with some additional utility methods, the new Date and Time API is fit for that job.

But I would like to read more about how to integrate the new Date and Time API with other frameworks as well, such as:

He holds a MSc in Computer Science (University of Bern, Switzerland)